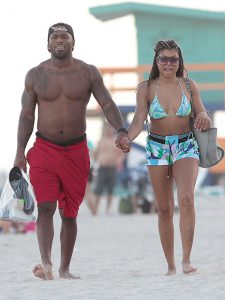 While Kelvin Hayden maybe training to return to an NFL team, he is doing it with a famous girl by his side.  According to multiple sources, Hayden was in Miami on Monday walking the beach holding Empire actress Taraji P. Henson’s hand.

Hayden, a 32-year-old Chicago native, has previously played football for the Chicago Bears and Indianapolis Colts and is currently a free agent.

According to reports, the two had a romantic dinner date the night before at Prime 112. “They were affectionate,” an eyewitness tells Us of the duo, who showed off their trim physiques on the beach Monday.