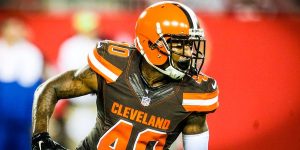 Today the Cleveland Browns made a statement by canning De’Ante Saunders. Saunders was involved in an arrest this past week, with Armonty Bryant. The team is obviously going to let Bryant slide because he has 5.5 sacks this year, but both should have been let go.  Bryant had been in trouble three times since 2012.  Saunders

The Cleveland Browns on Monday signed linebacker Cam Johnson to the active roster from the practice squad. To make room on the roster, the team waived running back Daryl Richardson.

Johnson is 6-4, 268 pounds and in his third NFL season out of Virginia. He has spent the past 13 weeks on the Browns’ practice squad. Originally selected by San Francisco in the seventh round in 2012, Johnson has appeared in 15 career games with the 49ers (two in 2012) and Colts (13 from 2013-14). He has registered three career tackles on defense and five special-teams stops.