British Rugby Star tries out for the three New York teams; Could he be a Tight End? 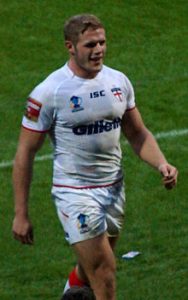 Englishman Tom Burgess, a prop for the South Sydney Rabbitohs at club level who helped his country win their test series against New Zealand last month, took a crack at impressing several teams in the state of New York.

Tom Burgess, who helped the Rabbitohs win Australia’s National Rugby League title alongside brothers Sam and George in 2014, is under contract to remain with the Australian club until 2018, but wanted to try his hand at the NFL level.

Fellow rugby league star Jarryd Hayne, who is trying to forge an NFL career with the San Francisco 49ers was the first to open the door for Rugby players. According to ESPN’s Adam Schefter the British rugby star Tom Burgess recently tried out for the Jets and Bills. This comes just a week after he worked out for the Giants as a tight end.

Burgess is 6’5 and could convert to either the tight end position or the defensive end position.