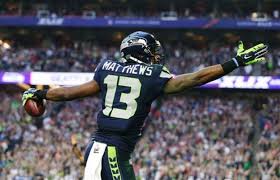 Super Bowl star Chris Matthews has been cut by the Seahawks

Mike Garafolo of FOX Sports reports that the Seahawks are waiving WR Chris Matthews on Tuesday.

Matthews played college football for Los Angeles Harbor College and the University of Kentucky, and played for the Winnipeg Blue Bombers of the Canadian Football League (CFL).

In Super Bowl XLIX, Matthews burst onto the scene with four receptions for 109 yards and a touchdown in the Seahawks’ 28-24 loss to the New England Patriots.

Despite his evident talent and big catch radius thanks to a 6’5″ frame, the struggling Seahawks haven’t been able to make use of the 26-year-old after his huge game on the NFL’s biggest stage. Whether it’s due to Matthews’ lack of development or Seattle’s game-planning is unclear.