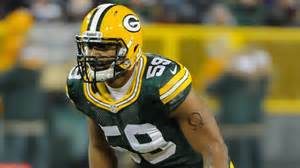 Former Packers linebacker Brad Jones worked out for the Saints

Ballard played college football at Mississippi State, and was selected by the Indianapolis Colts 170th overall in the 2012 NFL Draft.

Bronson Hill played college ball at Eastern Michigan and has played for several football teams including the Dolphins and Bills.

Phillip Hunt was originally signed by the Cleveland Browns as an undrafted free agent in 2009, and played college football for the Houston Cougars. He played for the Winnipeg Blue Bombers from 2009 to 2010, and the Philadelphia Eagles from 2011 to 2013.

Brad Jones was drafted by the Green Bay Packers in the seventh round of the 2009 NFL Draft, and played college football at Colorado. Jones was recently released by the Eagles.