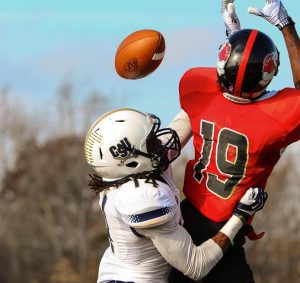 My name is Malcolm Jackson

I give back by doing community service with my fraternity Phi Beta Sigma Incorporated.

I am from Suwanee Georgia

I did track growing up and won state my senior year of HS in the triple jump.

I played CB, Safety, and a little bit of OLB in High school. I had one spring where I played WR as well.

I think what separates me at my position is my physicality and smarts on the field. Everybody is an athlete this day and age of football, but that doesn’t mean everyone has the physical nature of tackling and when it comes to press like I do. As far as smarts on the field I have the ability to see what’s happening and know where to be and doing my job within the scheme. Also knowing when to change up techniques depending on who my 1-on-1 match up is.

I look for releases off of press and how WRs stem there routes vs when they’re blocking. I also look for what type of routes WRs run in certain personals and formations.

The toughest player I’ve played is Malcolm Mitchell from UGA 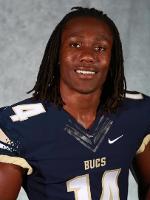 My pre game rituals are listening to certain music albums, praying, and writing GGT on my game tape. It stands for “God Given Talent”.

I definitely feel like coming from a small school it’s a lot harder to be recognized by scouts. I feel like as long as I dominate on the field and put my trust in God that all the rest takes care of itself.

My biggest strength is attention to details in my technique and in diagnosing an opponents plays on the field.

My biggest weakness is sometimes I can be slightly too nice and then it takes a second for that dog to come out.

If I had that second to tell a GM why I can be their guy, I would tell him that I am a dependable and versatile asset to any defense because I will be in the right spots for the scheme, tackle, and make plays.

My favorite player is Darelle Revis and my favorite team growing up was the Falcons.

I would choose to have dinner with Kevin Hart, Will Smith, and Steve Jobs

With my first pay check I would probably go buy a new DVD or movie to watch.