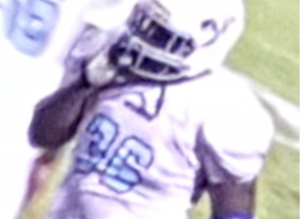 I like going to elementary schools as well as middle schools to read to students. I think school and learning are the base to all knowledge truth and wisdom.

Ray Lewis, because he is a leader that went through a lot of adversity. Birthdays are close,same zodiac signs or personal philosophy to life and how we carry ourselves.

I was a big time wrestler growing up as well as martial arts. Lots of hardware on display at my mother house.

At your position,what separates you from others?

My instinct for the ball, fight to the ball and Play recognition.

Personnel and tendency of each player within that personnel.

In Junior College going off by myself to California from Maryland not having much support I ended up homeless going off the promise of a friend having apartment ready but didn’t I had already started classes and football. I didn’t know anyone really only one assistant coach I didn’t want to tell him. I didn’t have a place to sleep so I slept at the school and a park next to it and left my bags and clothes in our locker room. I would shower and shave etc. I would be there at school as the janitors would be unlocking doors one of them caught on to me after like a month and told me his brother helps with getting people in homes and on their feet. So I hung up my pride and humbled myself for the first time on my own and I called after two months of putting him off.

Meditating and my spirit dance. Glass of milk the morning I wake up on game day and by noon I have to have 2 bottles of OJ. 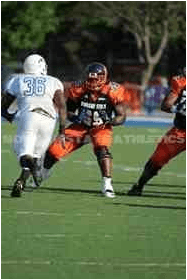 Strength and conditioning, game preparation, game speed and most importantly learning how to work with minimal tools. Football equipment and still maximize your ability to the fullest.

Team player, natural born leader and executor. Knowing where to be. Playing between the tackles and reaction to the play.

Straight line speed. Could be looser in my drops correcting my formation in the drop.

I plan to bring a positive impact on the community and the organization.

Lawrence Taylor on defense, Warren Moon on offense and the Oakland Raiders

Benjamin Franklin, Al Davis and my grand father who passed away.

Donate a portion to my high school, Junior college or current college Virginia University of Lynchburg. Something like that, because they believed in me!