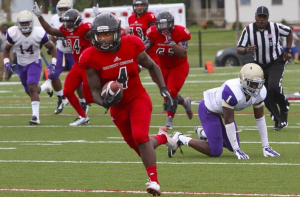 KCU wide out/kick returner Deandre Riddick is a ball of explosiveness and fire. He is a good football player

The coolest thing that I’ve done was after every game I will sign my game gloves and under shirts and pass them out to the kids. I also have given a pair of game gloves to one of a shrine kid, who couldn’t walk. I love to give back to the kids it’s nothing like seeing them smile from ear to ear

The hardest class I had to take was a Management class

What I look for in breaking down film is the weaknesses of the player I will be facing.

The DB from Duquesne

I would compare my play to a good friend, Cordarrelle Patterson. He is an elusive kick returner and hits small holes to break free.  I compare myselft to DeAndre Hopkins because of his route running and ability to find a hole in the secondary.

It probably is being a single parent. I just had to keep my eye on the prize. 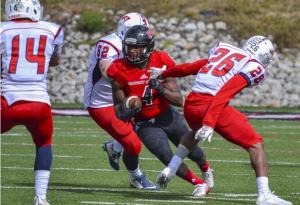 Single parent just kept my eye on the prize

I just look at film

Mt biggest strength is getting open

Biggest weakness is the deep ball

If I was a GM I would let you know that I’m a hard worker. I would give you all that I can give you out on the field, and I would Thank You for the chance to sit down and talk.

I would get a house for my Mom