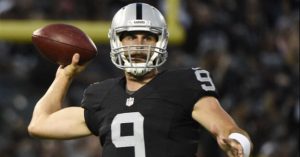 The Broncos have signed Christian Ponder

The Denver Broncos have signed former first round pick Christian Ponder, according to Ian Rapoport. Ponder was drafted by the Minnesota Vikings with the 12th overall pick in the 2011 NFL Draft. He played college football at Florida State University and was the Seminoles starting quarterback from 2008 to 2010.

The #Broncos are signing QB Christian Ponder, source said, who is in town today. He’ll start as the No. 3, then learn the offense.

Christian Ponder may end up as the backup eventually, but it’s no given. The #Broncos seem to like current backup rookie Trevor Siemian. — Ian Rapoport (@RapSheet) November 25, 2015

In case anyone was curious (maybe no one is), #Broncos were the only other team to try to claim Jimmy Clausen besides the #Ravens