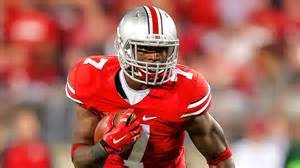 With Marshawn Lynch out tomorrow the Seattle Seahawks wanted to ensure they had another running back on the active roster. According to ESPN’s Chris Mortensen the Seahawks promoted RB Rod Smith to their active roster today.

Fred Jackson is still hoping to play in Sunday’s game, despite sustaining an ankle injury last week and being listed as questionable.

Smith, 23, wound up signing on with the Seahawks as an undrafted free agent out of Ohio State following this year’s NFL draft. He was unable to make the 53-man roster coming out of the preseason, but he was later added to their practice squad.