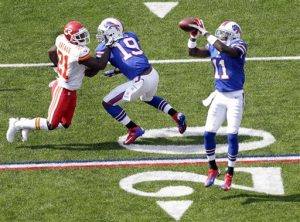 T.J. Graham was signed today by the New Orleans Saints

Today the New Orleans Saints added another wide out according to Aaron Wilson of the National Football Post. Wilson is reporting that the Saints have signed WR T.J. Graham to a contract on Tuesday.

Graham was drafted by the Buffalo Bills in the third round of the 2012 NFL Draft. He played college football at North Carolina State.