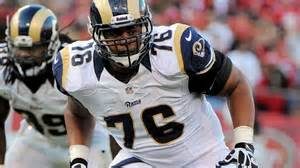 Rams HC Jeff Fisher announced Thursday that they are placing veteran OL Rodger Saffold on season-ending injured reserve, as he’s set to undergo surgery on his injured shoulder, per Nick Wagoner of ESPN.

HC Fisher announces Rodger Saffold will undergo season-ending surgery on shoulder and has been placed on IR.

Saffold was drafted by the Rams in the second round, 33rd overall in the 2010 NFL Draft. He played college football at Indiana.