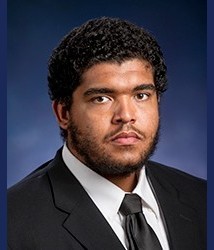 That’s a tough question. I just try to do for others as much as I can. I’ve given strangers my last dollar. I’m not about going out and using status to do good for people. Many people just go and do a community outreach just cause you are on a football team or it makes your organization look good. I believe in positive action with good intentions because in turn you get flawless karma.

I’ve taken a lot of classes where it was hard for me to stay engaged. I can’t name just one.

I have a few role models but the main one is my father. He’s accomplished a lot of things that I wish to.

I played basketball and baseball growing up.

Offensive line back in high school.

My strength, my hands and hips.

Formation tendencies, tendencies of the offensive linemen individually, blocking schemes, I look for what a coach wants to run in different situations. When evaluating myself I’m looking for footwork, hand placement, and whether I defeated a block fast enough.

Either Brett Hundley or Marcus Wheaton back in high school. 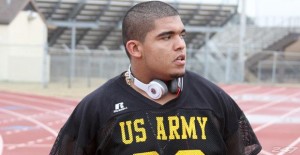 Haloti Ngata he’s a big smart guy who can play multiple positions on the dline.

My college career has been full of obstacles; from coming back from back surgery at Nebraska, to getting cut at Butler CC, to not qualifying academically out of EAC, but in every situation I’ve learned to remain positive and more importantly to BELIEVE in that positive thought, make a plan of action and work hard to make the most of any situation.

I have seen both sides of the spectrum guys at big time division 1 programs don’t realize how lucky they are with the resources that they have. Especially when it comes to nutrition, athletic training and strength and conditioning. Small schools just don’t have the same resources. I also understand how the NFL as a business works. A guy from a power 5 conference is gonna get more opportunities than a guy from a mid-major than a guy who played 1aa than a guy who played d2 or 3.

My toughness both mentally and physically.

I’m still continuing to reach my full physical potential especially when it comes to conditioning.

I can help any teams run defense. I don’t believe there are many players who are as smart or as tough as me. I don’t believe I’ve even come close to reaching my ceiling as an athlete. I’ve been coached by 6 different dline coaches at 4 different schools and can take coaching. I can play in any defense and any scheme with whatever technique I’m told to anywhere from the 5 to the nose. I don’t come with the big ego like many of these other players. I’ve been humbled by my past and am ready to be a pro. I belong in the NFL

My dad played for the Raiders so that’s my favorite team. My favorite player was Warren Sapp

I’m going to put my sons mother through school. She’s out here in commerce with me and has sacrificed a lot for our family.