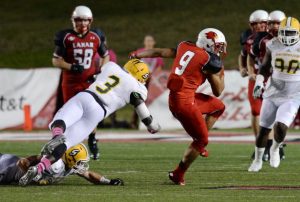 Consistently helped the special needs children back in high school. We, the football players were always involved in their lives during and out of school.

As of right now Organic Chemistry

My Father and my uncle. My Father has a large influence on me for the type of man I am today. I looked up to my Uncle when I was younger who took care of me a lot. However, he passed away at a very young age (20) getting into mess he easily could have avoided. By his unfortunate mishap, I am fortunate to stay away from trouble.

I played basketball and ran track 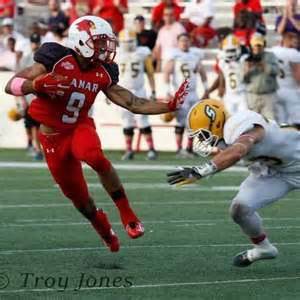 I have to say my ability to find open space and set up defenders. I am not afraid to go into the middle of the field.

I look for certain habits defenders like to consistently do, which direction they have trouble turning to, and do they rely on speed for coverage or simply try and play catch technique.

Each year I’ve had a challenge against the entire Southeastern Louisiana secondary.

I would have to say a Jordy Nelson. He very consistent runs great routes, strong frame and hands. He is a possession WR that can make the crucial catch to continue the drive and move the chains. He is humble and competitive.

I was a walk-on for two years. Proving myself to the coaches was an everyday task but I kept faith in God and my talent. Eventually I prevailed.

I listen to slow jams and gospel music before the games because I play better calm.

I need to prove that I can be a complete player. I can do more than just play receiver. Special teams will be the key to my future.

My ability to consistently catch the ball in traffic. I believe I make some of the hardest catches look easy.

My speed. I know I am not the fastest man in the world so I rely on technique to make up for it.

An apartment and then pay off my student loans.