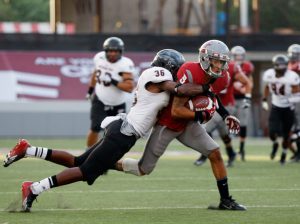 LeShaun Sims is an NFL player, and he is a beast

The coolest thing I have done off the field would have to be volunteering to help run a youth football camp for local pop warner teams.

My parents because they raised my of course, and instilled work ethic in me at an early age.

I played basketball for seven years, and baseball for two.

In high school I played Free Safety and Wide Receiver.

I would like to think my size, speed, and intelligence is what separates myself from others.

I look for the offenses favorite concepts out of each formation. I also look at how they like to use the particular receiver I am covering. I will also usually look for tendencies of the receivers.

Keenan Allen from Cal has to be the toughest receiver I have ever faced.

I would have to say getting an athletic scholarship out of my high school. My freshman year we were in the lowest division of football in Las Vegas which was 8- man football. It was a brand new program with coaches always coming in and out. There hadn’t been anyone to earn an athletic scholarship from my school since its starts back in 2004. I overcame it by going to practice every day and striving to get better and learn as much as I could.

Before games I like to listen to music and envision myself making big plays to help my team win.

As with any other small school player I feel that I will need to prove that I can compete with the best.

Speed is my biggest strength.

I’m a hungry corner from a small school that’s desperate to learn the game and the position, if you take a chance on me you would not be disappointed.

My favorite player growing up was Ed Reed.

I would buy my mother a new car.