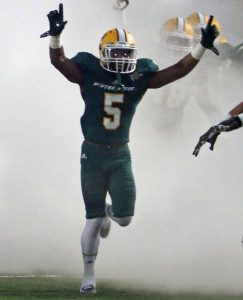 Freshman English 101, I took this class at Tulane Wrote my first 10 page paper

My dad because he has always been about action. He doesn’t talk much but when he does he gets everyone’s attention. Also because he is well respected but humble at the same time.

I’m very tenacious play very fast and low Love to tackle and I have a knack for forcing fumbles. Another thing that separates me is that i have made all conference at every position in the secondary, versatility and durability separates me.

Tendencies, WR splits, RB running styles, QB’ shoulder tip for his throws, and how the ball carriers hold the ball.

Who was the toughest player you ever faced? Jarvis Landry

Having to transfer from Tulane to Southeastern, it was big having to come a level down, but i still had the same dreams and goals in mind that’s what kept me going. Another thing was I had to be comfortable adjusting to change, because the NFL changes all the time, I could be traded one day and I need to be ready to keep making plays.

Have to take a crap before every game

I have to overcome not blending in with my competition and excelling above and beyond. I also have to stay mentally focused because not all of my teammates have the same dreams and goals as I do.

I would say i guarantee you that I will give your defense a different element and i will excel at wherever you put me on the field.

Saints were my favorite team because they’re the home team. Sean Taylor was my favorite player because of how reckless he played and the respect he got from opponents.