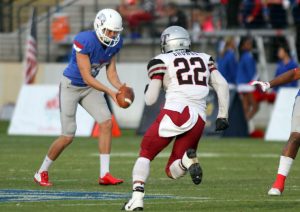 Peyton Manning. Peyton is a great, yet humbled leader. He has overcome tremendous adversity and is a testament to the fact that hard work and preparation pay off.

Growing up I played football, soccer, baseball, tennis, basketball, ran cross country, and was on the swim team.

Yes, I started out as a wide receiver and defensive back.

My ability to place the ball in the direction that I want, and to pin the opponent deep in their own territory. 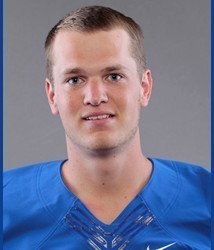 The returners tendency’s, direction of the kick, and my mechanics.

Ryan Allen of the New England Patriots. There are visual similarities with us both being tall and left footed (which makes the ball rotate the opposite way). Also, he may not have the biggest leg for a punter in the league, but his consistency and ability to pin the opponent deep in their own territory are huge.

Not starting my first game of my senior year in high school. We ended up not punting that game and I earned the job the next week and became All-State by the end of the season.

I listen to Believe by Brooks & Dunn before every game.

Each person should be able to add some inherent value to the team, and I believe that by being a team player and doing my job to the best of my capabilities I can do that.