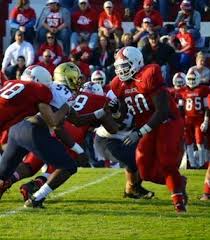 Giving back is a big part of football out here. One of my favorite things to do is help coach the little kids at our Little Aggies Football Camp. Its fun watching younger kids enjoy the game and have as much fun as they do.

My Dad is my role model because of all the things he’s did and is doing for my family. He always made sure that we had enough even when times got hard and I just hope that one day I can be the father and husband that he is.

No other sports. Just football.

In high school I played Nose Guard, Center, and Guard.

What separates my from others is my athleticism and my football IQ. I have great knowledge of the game and know what to do at all positions across the offensive line. Also my hand placement is great.

When breaking down film I look for tendencies of the defensive line and linebackers. What hand is down, whether they are a bull rush guy or speed guy, do they cheat out or in when they are running twist and stunts. Do the linebackers play over the top of blocks or do they try to go down the middle of the lineman. Just things like that.

Toughest players that I have ever faced is Jordan Tripp from University of Montana & Michael Dyer in high school.

I compare my game to Chance Warmack because he is a very athletic guard that likes to pull and mull lineman and linebackers. Aggressive player that likes to finish blocks.

One of the biggest obstacles that I’ve had in college is being ineligible after my freshman year and having to make 4 A’s in the summer to play again. I made the 4.0 and my grades have been good ever since. 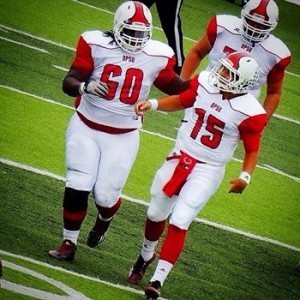 My pre-game rituals is listening to music and visualizing myself making plays. And shaking all my teammates hands before we hit the field.

As a small school player I feel as if it’s just harder to get your name out to the scouts and the NFL. The film will speak for itself, the hard part is getting the right people to watch that film.

My biggest strength is my athleticism and my awareness on the field. I have quick feet & great balance. Also I have the ability to pull a lot and get outside the pocket. Also my ability to make blocks at the second level & I’m open space.

My biggest weakness is that I need to finish blocks better. I’ve been told I need to extend my arms more.

I would tell that GM that I am a great player that he wants to have on his team. I work hard and give everything that I have on the field. I’m a leader and a captain in the field and in the locker room & I’m going to be one of the best small school stories to ever happen to the NFL.

I would have dinner with my great grandpa on my moms side, my Grandpa on my dads side, and LeCharles Bentley.

With my first NFL paycheck I would buy my mom a new car.