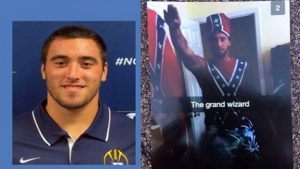 Tyler Owens of Pace University should be suspended for this photo. Do you agree?

We say it all the time on our twitter account.  Think twice before hitting the send button people. Our site has been doing everything we can to help out small school football players, but kids like Tyler Owens, make it hard for us. According to the Blaze.com, Owens a senior defensive lineman posted this photo of himself wearing a confederate flag while giving the Nazi Salute.

Pace University’s football captain was suspended from the team after a photo of him posing in Confederate flag garb while making a Nazi salute was released to media outlets.

The photo of Tyler Owens, a senior defensive lineman, is a screenshot of a Snapchat post and captioned, “The grand wizard.”

According to the Pace Chronicle, an alleged group of anonymous black students obtained the photo and sent it to the media.

What do you think should happen to the small school college football player?