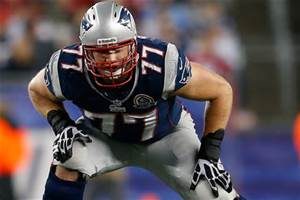 Nate Solder has signed a two year deal with the Patriots

The Patriots reportedly inked left tackle Nate Solder to a two-year, $20.62 million extension on Wednesday, according to ESPN’s Adam Schefter. The deal will keep Solder in New England through 2017.

Part of the deal, per Schefter, is the Patriots cannot apply the franchise tag on Solder following the 2017 season.

Solder was drafted by the Patriots with the 17th overall pick back in the 2011 draft, and he took over at left tackle a few years later when Matt Light retired following the 2011 season.

The 27-year-old Solder is now heading into his fifth season with the team, and was reportedly named a team captain on Tuesday.