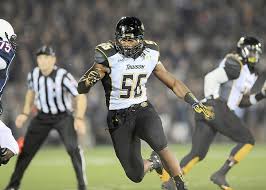 Delaire is a small school pass rusher from Towson University that originally signed to the Buccaneers out of college as an undrafted free agent.  He then was claimed by the Redskins.  Delaire was a premier pass rusher at the college level.

Cole on the other hand was released. He was signed by the Minnesota Vikings as an undrafted free agent in 2003. He played college football at Iowa. Cole has also played for the Detroit Lions and Green Bay Packers.