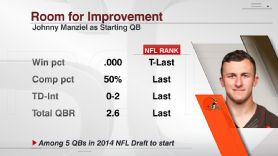 Johnny Manziel’s first start was not the greatest, but he will get a shot to redeem himself. After Josh McCown was hurt in the 31-10 defeat while trying to run up the middle, Manziel will be given the start.

Manziel had an early highlight, finding Travis Benjamin for a 54-yard touchdown. It was Manziel’s first NFL touchdown pass.

The rest of the game didn’t go so well for the former Heisman Trophy winner, who missed much of training camp with elbow problems. Manziel had three turnovers in the second half — an interception and two fumbles — and completed 13 of 24 passes for 182 yards in the game.

“Obviously, the second half leaves a bitter taste in your mouth,” Manziel said. “We’ll see what happens this next week.”

Look at the bright side though Browns fans, it cannot get any worse than his first NFL start…