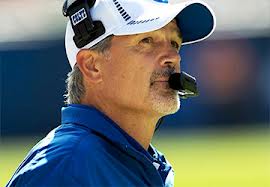 Could Chuck Pagano be done in Indianapolis?

The Indianapolis Colts have a very solid football team on paper, but the Colts may have an internal beef. According to Bob Kravitz of WTHR.com, the Colts general manager and Colts head coach are not on good terms right now….

From a distance, this looks like a marriage made in heaven. Together, Pagano and GM Ryan Grigson have taken a 2-14 team that was saddled with mega-millions in dead cap money and, led by Andrew Luck, have reached the playoffs three consecutive years.

But there are problems, internal problems, a growing disconnect between Grigson, who has a five-year deal, and Pagano, who is in the final year of his four-year deal.

After poking around the last few weeks and talking to people who understand the dynamics of the situation, here’s my read on things: As is so often the case in professional football, the head coach wants more say in personnel decisions. As Bill Parcells used to say, if he’s going to cook the meal, he wants to pick out the groceries. I cannot list with any certainty specific examples where Grigson and Pagano have butted heads in personnel, but I can say they haven’t always seen eye-to-eye.