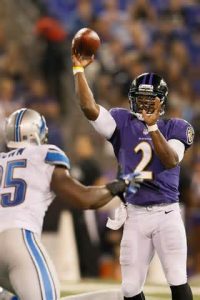 Jay Glazer of FOX Sports reports that the Bills have named Tyrod Taylor their starting quarterback for Week 1.

Taylor, a former backup for the Baltimore Ravens, has so far embraced his opportunities this preseason. During the team’s third preseason game, Taylor completed 12 of 13 passes for 122 yards, adding one carry for 20 yards and a touchdown. At this point, it’s between Taylor and E.J. Manuel. Taylor doesn’t seem to be losing his grip on the starting position.

Taylor should only help offensive players like Sammy Watkins and LeSean McCoy. Perhaps his biggest asset for fantasy owners is his ability to read defenses and run the ball well if needed. He’s an intriguing sleeper in the late rounds of your fantasy draft.