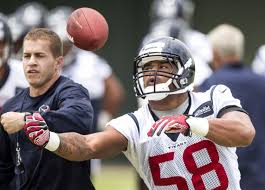 The Houston Texans have lost sixth round pick Reshard Cliett for the season according to John McClain.