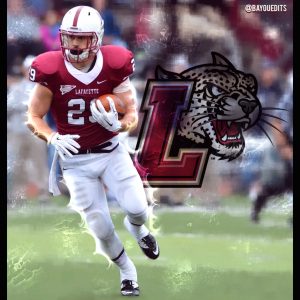 The Pittsburgh Steelers waived rookie RB Ross Scheuerman from injured reserve on Friday, making him a free agent. Scheuerman, 22, wound up signing on with the Steelers after he went undrafted out of Lafayette back in earlier May.

During his college career at Lafayette, Scheuerman was a four-time All-Patriot League selection and finished with 3,504 rushing yards and 31 rushing touchdowns in four seasons. He also caught 129 passes for  1,129 yards and eight touchdowns.

Scheuerman is a big back that had a decent week at the Senior Bowl, the only problem will be if he is healthy. If he is one hundred percent, then expect him to latch on elsewhere. He is a very similar back to Zach Zenner who is tearing it up in Detroit for the Lions.