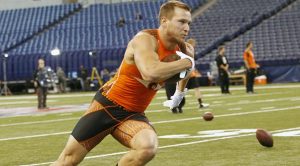 Devon Wylie has been signed by the Oakland Raiders

Raiders have signed wide receiver Devon Wylie. Wylie was originally drafted by the Kansas City Chiefs in the fourth round (107th overall) of the 2012 NFL Draft. He appeared in six games during his rookie campaign, recording six receptions for 53 yards. In 2013, he played in two games with the Tennessee Titans, handling kick and punt return duties. Last season, he spent time on the practice squads of the San Francisco 49ers and St. Louis Rams. For his career, Wylie has played in eight games and totaled six catches for 63 yards, 14 kickoff returns for 285 yards (20.4 avg.) and seven punt returns for 30 yards (4.3 avg.).

Wylie played collegiately at Fresno State, appearing in 44 games and totaling 98 receptions for 1,327 yards and eight touchdowns. He added 41 punt returns for 553 yards and two touchdowns. The 5-foot-9, 185 pounder is a native of Roseville, Calif., and attended Granite Bay High School.