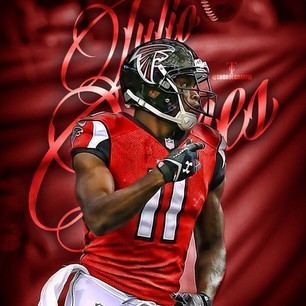 The Atlanta Falcons owner Arthur Blank and Julio Jones have been in conversations about a new contract.  Both Demaryius Thomas and Dez Bryant both received 14 million dollars a year.

“We’re in the middle of those discussions,” Blank said. “We expect Julio to be a lifer for the Falcons. We’re moving forward and have every reason to be positive and be enthusiastic about it.”

“I think whatever the market is in the league, we look at Julio as certainly being in that class,” Blank said. “The specifics, his length of contract and where he is in his contract terms is different than those players [Bryant and Thomas]. All of that needs to be built into the new deal. But we view [Jones] as one of the top receivers in the NFL, and I think most people do as well.”

“I think we’ve gotten the best medical advice, really, in the world,” Blank said. “And he followed their program last year to a T. This year, he’s been able to do more during the offseason, and I think that reflects in the way he looks at camp and the way he’s working.”