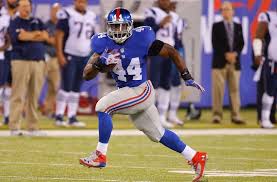 If the New York Giants want to get to a Super Bowl again, they will need their running backs to step up. Last year, Andre Williams the former Boston College runner led the Giants. Williams led the Giants in rushing with 717 yards as a rookie, but he averaged only 3.3 yards per carry, forced onto the field as a starting running back before he was ready after Rashad Jennings hurt his knee in a Week 5 victory over the Falcons. Williams talking to the media guaranteed a Super Bowl this week.

He added: “To try to do something is different than to do something. Trying doesn’t necessarily solidify your intent. But if you’re doing something then you’re gonna get it done.”