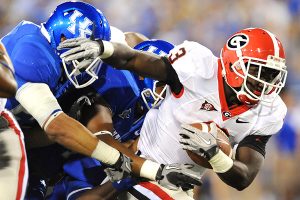 Will any team be willing to give the former HS Legend a shot?

Life is supposed to be made up of second chances right?  We are supposed to be able to forgive others for their actions. When we have wronged someone, we have no right to demand another chance, but we should work to earn another chance by continued demonstration of repentance and change. That is exactly what Washaun Ealey is trying to do.

In Georgia, Washaun Ealey was a high school legend. He still owns the Georgia high school record for most touchdowns in a season with 58. That is 12 more than anybody else. He also has the record for career touchdowns, he reached the end zone 133 times, 22 more than anybody else. After spending two years at the University of Georgia and making a couple mistakes, Ealey transferred to Jacksonville State.  Ealey would play his final two seasons with J-Ville State before entering the NFL Draft.

Ealey would go undrafted and land one work-out with the Washington Redskins.  He was not signed, so Ealey had to go back to the drawing board. Ealey stayed in shape and finally received an opportunity.  Ealey was given a shot in the Indoor Football League.

Ealey finished the season for the Cedar Rapids Titans scoring 24 rushing touchdowns, and he is still hoping to earn a shot in the NFL. Ealey is extremely thankful for the IFL, but he knows his fate lies in the National Football League.

We are here for players, and believe in second chances, so here is the hand written letter from Washaun himself.

In life we all have to face challenges. Challenges that we either can overcome or a challenge that will break us. I Washaun Ealey, 25 years of age from Stillmore Ga. have faced many of them. The challenge that stands out the most is “giving up”. I know in my heart and in my mind, that is not an option. “Failure will never overtake me because my determination to succeed is strong enough”. I have a passion for what I’m good at and that is football. I’ve played for many years.

During this time, I’ve had many ups and downs. There were times that I really didn’t know that my actions can cause me my future. I found out. Being human, we all have fallen short at times. With age comes wisdom, better understanding, and more knowledge. I want to come before you and show you that I’m ready! All the practices, training, and games that I’ve played, I want to be successful.

My position with you will be a start of great things. I can’t give up now. I’m smarter now and know that I cannot fail myself, my family and my friends that are depending on me to make it. By me doing so, I feel that it will draw others in my community to know that there are other roads to take. I want to be a leader to our future leaders.  All I’m asking is for a chance. Yes, I agree I’m still young and many mistakes could still be made because that’s life. But now I know how many are relying on me.

Growing up, I’ve seen it all. From gangs to drugs, and the people that just don’t appreciate life and what could be received from it. I do not want to be a statistic of those factors. I want to first live by God and carry his name.

They always told me in school “the ball is in your hands”. All this time, I never actually paid attention to that until now, I know it’s my fate to play in the National Football League.

I am human and I realized the choices that I made was not the right route, but I can promise you that you will not be disappointed. I’m willing to train harder, play harder and be a asset to your team. If anything that I can do to allow you to even consider me a spot, please inform me because I know whatever I can do today, will improve my chances for tomorrow. Thanks for your time…

Just as God is patient and forgiving, He wants his children to be patient with and forgiving of others. “Therefore, as God’s chosen people, holy and dearly loved, clothe yourselves with compassion, kindness, humility, gentleness and patience” (Colossians 3:12). He gives us second chances, and we must give the same to others. Jesus gives a stern warning to those who refuse to forgive, saying that if we will not forgive others, God will not forgive us (Matthew 6:15; see also Ephesians 4:32; Colossians 3:13; and Proverbs 19:11). If someone is truly repentant, then we are obligated to forgive (Matthew 18:21-22).

Giving someone a second chance means we give him another chance to earn our trust. But that does not mean we instantly forget what experience has taught us. Trust must be earned over time, and we are foolish if we give trust prematurely. NFL teams may already have a set roster, but injuries could occur.

Right now the high school legend has dug himself in such a big hole he is slowly trying to crawl out, hoping someone will give him a hand. If one team is willing to put their hand in the hole and help Washaun they might end up landing a premier back.