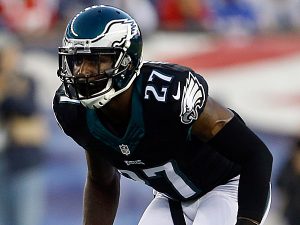 Dean Blandino, the NFL’s head of officiating, said Monday morning on NFL Network that the play was “not a foul” and that no penalty should have been called. His reasoning was that on a zone-read play the quarterback is subject to being hit just like any other runner.

Well that has one Philadelphia Eagles member upset. Malcolm Jenkins the Eagles defensive back says he will be targeting quarterbacks on zone reads now every time.

“If I take myself out of an Eagles uniform, I’d probably do the same thing (as Suggs), Eagles safety Malcolm Jenkins said. As a defender, my way of scaring you out of that run concept is hit your quarterback, Jenkins said. It is a zone-read run, Jenkins said. When told that Kelly disagreed, Jenkins laughed and said, “Well of course, according to the head coach. I’m just saying as a defender, if I was game planning for the Eagles, I probably wouldn’t go low for the quarterback, but that’s where there’s a little bit of discretion from a player’s standpoint of where you hit somebody. But if somebody’s running a zone-read and I want to scare them out of it, I’m gonna hit the quarterback.”

Has the NFL opened the door for some insane hits on quarterbacks now?