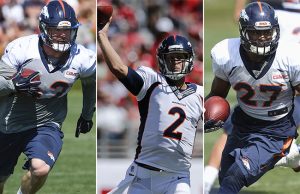 The Denver Broncos announced Monday that they’ve parted ways with 11 players, as they trim their roster down to 75 players before tomorrow’s deadline.

… Dysert was in a battle for the No. 3 quarterback spot with rookie Trevor Siemian, but fell behind after struggling in third-quarter work in Seattle on Aug. 14. Dysert went 2-of-5 for 14 yards before Siemian took the reins of the offense in the final quarter of the Broncos’ 22-20 win.

.. Duncan, a productive tight end at Dixie State, spent most of his time with the Broncos working at fullback. He had the lead block on Juwan Thompson’s game-winning, 1-yard touchdown plunge against San Francisco on Saturday. The Broncos now have just one fullback/tight end on the roster: veteran James Casey.

… Duncan was one of three rookies waived, along with guard Andre Davis and CB Tevrin Brandon.