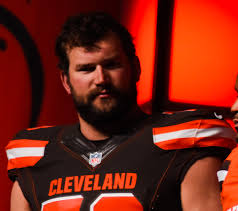 Joe Thomas is a very solid offensive tackle, and probably a top 5 at his position. He does not want to be anywhere else, but there is a problem. The team has not had a Franchise quarterback in decades.  Well Thomas understands that and was very honest when talking about the team’s situation.

“The optimism that I have right now, I feel I’m on a team that can make the playoffs with a franchise quarterback,” Thomas told ESPN Cleveland. “I certainly don’t want to be traded. If I ever got to that situation, I guess I would have to live with it and make the most of it. But, I want to be in Cleveland when we make the playoffs.”

Thomas went on saying he wants to be part of the Browns when they do strike the playoffs.

“It would be like being a secretary (with a team) and getting a Super Bowl ring,” he said. “Not that you didn’t have a part in it, but here I would be such an integral part of the turnaround. It’s just that important to me. It’s not as important to say ‘I played in the playoffs once for Denver, and they were a great team before I got there and I just kind of rode the wave.'”