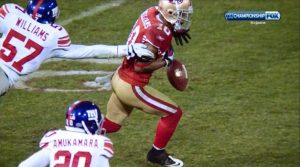 Do you remember Kyle Williams of the 49ers?  He is now on the Denver Broncos roster, but he was carted off the field today with a right knee injury, while returning a punt. The depth at wide receiver is huge right now for the Broncos, but the former standout could have been used on special teams.

Williams is well known for fumbling a punt and receiving death threats from 49ers fans. Hopefully Broncos fans find out some good news regarding Williams.