Bills are optimistic they will lock up Marcell Dareus long term 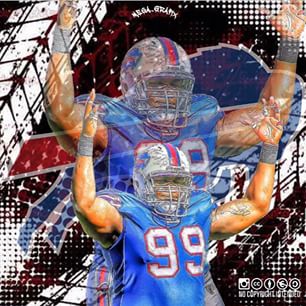 Bills best defensive tackle will miss the first game of the season due to suspension, but the Bills still want him locked up long term

“I’m optimistic, I am,” said Whaley during an interview with WGR Sportsradio 550 Wednesday . “Now will it come to fruition? There are a lot of moving parts, but I’m optimistic when both sides are trying to find a solution where everybody feels they win. We’ve exchanged proposals and we’re working hard. We want to get this thing done,” said Whaley. “Something of this magnitude is going to take some time, but we’re confident that both sides want to get this done.”

Hopefully the Bills are able to pay Dareus less than Ndamukong Suh was paid. Whaley would not comment on figures.

“I’m comfortable giving a contract that we think is right for the Buffalo Bills and he thinks is right for him,” Whaley said. “What that number will be who knows? But we’re just trying to find a middle ground where they feel they’ve won and we feel we’ve won and it’s best for both of us.”