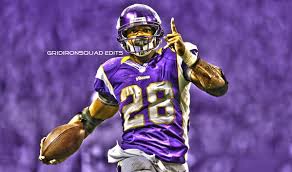 Adrian Peterson is finally signed to a long term deal with the Minnesota Vikings, and his coach is a happy camper. Mike Zimmer told the Minnesota Star Tribune that he was happy to have Peterson back and happy.

“We just thought it was beneficial for both sides that we got this done,” coach Mike Zimmer told Matt Vensel of the Minneapolis Star Tribune. “He’s proved that he’s an integral part of this organization and in the state of Minnesota. He also went through some hard times, as did we. It was a good gesture on both sides to get it done.”

So with Peterson back, would Mike Zimmer talk about the playoffs?  Shoot they went 6-9 last season without the All-Pro running back.

“We haven’t even made it to training camp yet, so I’m not going to talk much about the playoffs, that’s for sure,” Zimmer said. “We’ve got so much more work to do before we even start thinking about those things. We haven’t played a preseason game. We don’t know who’s going to be healthy, who’s not going to be healthy. We don’t even know what the team is going to look like yet. I don’t know. I’m not going to be all hung up on those things. Obviously we hope we have a great year. It’s good for the fans to get excited. All this stuff, how we play as a team on Sundays, that’s what it will come down to.”