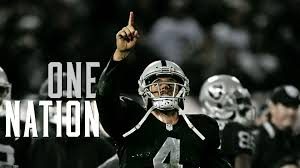 Can Derek Carr lead the Raiders to the playoffs

“Goal No. 1 is to win our division, and I don’t see why not,” Del Rio said in a video on the team’s website.

The Raiders offensive line coach Mike Tice added the team is going to be a championship caliber team.

“We’re going to be a championship football team.”