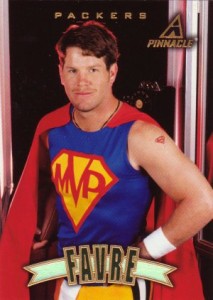 LeRoy Butler says his quarterback was a supernatural football player

Packers legend LeRoy Butler is famous for the Lambeau Leap, but he knows quite a bit about his former teammate Brett Favre who was inducted into the Packers Hall of Fame yesterday.  Butler talked about Favre and said the gunslinger was a supernatural human.

“I don’t think he’s human,” LeRoy Butler, the former Packers safety said this week, per ESPN.com’s Rob Demovsky. “Whenever it’s his time to leave this earth, I want to see the X-rays. I don’t believe it. He’s not human. I’m telling you the guy’s a mixture of Wolverine, RoboCop and Superman.”

Doctors would tell him he could not play, but Butler said he would not listen.

“That thing was yellow, green, orange and brown,” Butler said. “I said, ‘Dude, you can’t play next week.'”

Favre is a Packers legend, but would always go out there no matter what according to Butler.