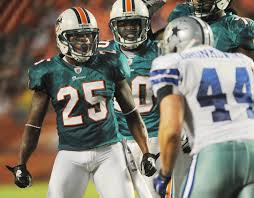 Will Allen is facing decades in prison for fraud

Former Miami Dolphins cornerback Will Allen committed 23 federal felonies and faces decades in prison, according to an indictment from the U.S. Attorney in Massachusetts.

If convicted, Allen faces up to 20 years on each charge of wire fraud and shorter sentences for the other felonies.

Allen,  ran a company that made high-interest, short-term loans to professional athletes. To fund the loans, he raised money from investors.

In November, Allen fabricated two loans to pro baseball players, one for $300,000 and the other for $100,000, the FBI says. They raised money from investors to fund the phantom loans but used the proceeds for various expenses. Allen’s largest loan was to the NHL’s Jack Johnson, the Columbus Blue Jackets defenseman who filed for bankruptcy last year, according to the Palm Beach Post.