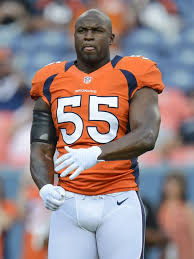 D.J. Williams is hoping to find a home before the start of the 2015 season

D.J. Williams the former Denver Broncos linebacker is hoping to make a return according to Alex Marvez of Fox Sports.

Free agent LB D.J. Williams tells Alex Marvez of FOX Sports that he’s still hoping to catch on with a team for the 2015 season.

He played college football at the University of Miami. He was drafted by the Denver Broncos in the first round of the 2004 NFL Draft. There are several teams that could use a middle linebacker.  The Bills and Patriots are both a team that could use a veteran Mike backer.

Williams had 46 tackles in 2014 when he played for the Chicago Bears. Williams was arrested in 2014 for a DUI.  Hopefully he can rebound like Erin Henderson did this year.