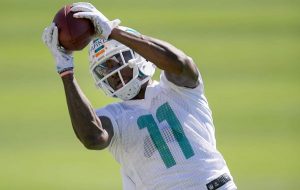 We have placed S Don Jones and WR DeVante Parker on the Active/Physically Unable to Perform list.

Many have Parker as a breakout player in 2015, but he has to prove to me he is healthy before I label him anything. I think he will be a great wide out, but he needs to get healthy. He has had numerous injury problems over his career.