Could the Cleveland Browns trade Phil Taylor before the season? 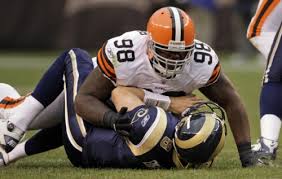 Could the Browns land a draft pick for their former first round pick?

The Cleveland Browns drafted Danny Shelton in the first round, and that might be bad for big man Phil Taylor. According to the Chronicle’s Scott Petrak, the Browns could part ways with Taylor who is owed quite a bit of money, but what if they could trade him?

The Browns thought they had plenty of depth on the line last year until injuries across the board decimated the position and left the front office scrambling to find healthy bodies to finish the season. Farmer has amassed even more depth this year, drafting nose tackle Danny Shelton and end Xavier Cooper and signing free agent Randy Starks.

The Browns have so many capable linemen, they should have tough decisions to make when camp ends. Shelton, Cooper, Starks, Desmond Bryant and John Hughes seem like locks to make the roster. That likely leaves only two spots for a combination of Phil Taylor, Billy Winn, Ishmaa’ily Kitchen, Christian Tupou, undrafted rookie Dylan Wynn and Jamie Meder. The list doesn’t include Armonty Bryant, who could be counted as a linebacker.

Taylor surely has the talent and track record to warrant a starting job in the final year of his contract. But he’s coming off knee surgery and must show he’s 100 percent just to make the team.

The hardest thing for the Browns will be to find a team willing to pay his salary.  Taylor is making his way back from a 2014 knee injury that required a clean-up procedure and forced him to miss OTAs and minicamp. The Browns would just be eating Taylor’s $5.477 million salary if he were to be cut, but if traded that is a huge savings.