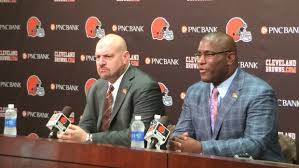 Are Mike Pettine and Ray Farmer beefing with one another?

Today Tony Grossi of ESPNCleveland.com, made a report about Mike Pettine and GM Ray Farmer beefing with one another.  The report was rather long, but Pro Football Talk’s Mike Florio broke it down. Here is the gist of what is going on between the two according to the report.

Currently, what’s going wrong is the relationship between coach Mike Pettine and G.M. Ray Farmer. Tony Grossi of ESPNCleveland.com points to the recent departure of Browns director of player engagement Dr. Jamil Northcutt as tangible evidence of a rift.

Northcutt, per Grossi, was a “major player” during the 2014 season, as both a confidante to Farmer and an irritant to Pettine. Multiple sources tell Grossi that Northcutt relayed Farmer’s notorious in-game text messages to the coaching staff, but at least one source told Grossi that was “absolutely false.”

It honestly sounds like something they can fix, but it is never easy to go to work when you have a problem with your boss.  It will be interesting to see what happens from  here out, but I am sure neither will admit there was or is a problem.