Amari Cooper has the highest 2016 NFL Madden Rating; Jameis is higher than Mariota 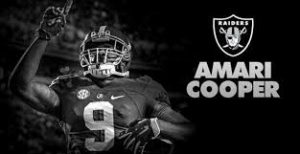 Amari Cooper of the Raiders has the highest Madden Rating

2016 NFL Madden Ratings have been released according to Steve Noah of Operation Sports. It looks like the Raiders rookie Amari Cooper is the highest rated player.  It is interesting that Jameis Winston is rated quite a bit higher than Marcus Mariota who was selected one spot behind him. Here are some of the ratings according to Steve Noah.