Why is the Buccaneers sorriest offensive lineman demanding a pay raise? 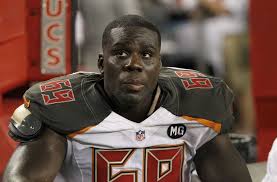 Demar Dotson is demanding more money, but he is not even the best offensive lineman on their team

According to the Tampa Bay Times, Demar Dotson’s absence this week at Tampa Bay Buccaneers OTA practices is because the Bucs’ starting right tackle is upset with the contract he signed two years ago.

Dotson might be the Bucs most reliable offensive lineman, but that does not mean he’s a great player. Dotson will turn 30 this fall and have developed into an average offensive tackle with decent athleticism, but lacking the power to dominate. The team drafted two offensive lineman but at this point the Buccaneers should not budge. I would not let a sorry offensive lineman dictate his contract.