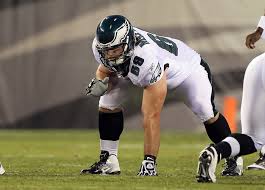 Eagles guard could be dealt sooner rather than later

Drew Rosenhaus has been given permission to shop his client Evan Mathis, but might not have the easiest mission.  In a radio interview, ESPN insider Adam Caplan said he expects Eagles LG Evan Mathis to be moved before the start of the season.

“I’ve been asked repeatedly about his future,” Caplan said, “and I would say I would be pessimistic, clearly, for him to be on the (Eagles) this fall.”

Mathis is owed $11.5 million over the final two years of his deal, and that is not smart for a team who is needy at the guard position.  The 33 year old veteran guard, is known as one of the best in the league but his salary could be hard for him to find a suitor.
Related TopicsEaglesEagles Drafteagles draft news and noteseagles draft prospecteagles newseagles noteseagles rantseagles rumorsNFL Eagles