Dolphins new tight end wants to return to Pro Bowl form, Can he get over the concussions? 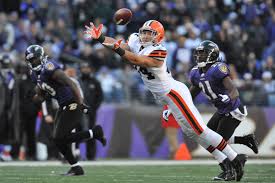 Dolphins signed tight end Jordan Cameron, who was once a beast in the NFL. Last year however was not the best for him. Even Cameron would rather forget last year, when he was short-circuited by shoulder issues and a nasty head injury. His 24 receptions for 424 yards were a far cry from the 80-catch, 900-yard, seven-touchdown season in 2013. Cameron hopes he will return to his Pro Bowl form.

“I was in a similar system two years ago and it’s something I thrive in, I would say,” Cameron said, per the team’s official website. “It’s a lot of stuff that they throw the ball to the tight end and you’ve got to be able to run and get some separation. I think it’s what I do best, so I’m just looking forward.”

If Jordan Cameron can overcome his concussion issue, him making the Pro Bowl is not a far cry.