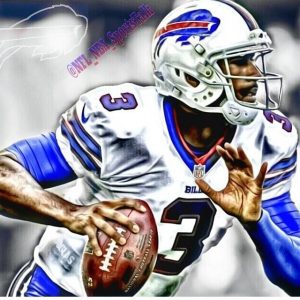 EJ Manuel could be on his way out in Buffalo if he cannot get it together.

The Buffalo Bills have signed both Tyrod Taylor and Matt Cassel this off-season, to compete with their former first round pick EJ Manuel.  While many feel Cassel and Taylor are considered the front runners to start, where does this put Manuel?

Well today a report was published by Joe Buscaglia with WKBW in Buffalo saying that Manuel could be on his way out of Buffalo, if he cannot pick it up.

If former first-round pick and quarterback EJ Manuel doesn’t show some serious progress this spring and summer at OTAs, minicamp and training camp, he very well may be enjoying his final few months in Buffalo as a member of the organization.

While I would not put it past the Buffalo Bills organization to do such a thing, I would feel it was a very bad decision.  EJ Manuel has only started in 15 games and was injured in one.  His record as a Bills starter is 6-8, beating key teams like the Carolina Panthers and the Baltimore Ravens.  While Manuel has had some boneheaded plays in his career, like the pass to JJ Watt that let the Texans beat the Bills, Manuel is still a rookie technically.  The kid sat behind Kyle Orton most of the season last year to learn from him, but in my opinion, you cannot let him go.  Yes he is a first round pick, but the Bills have such a pressing need at the quarterback position.  Matt Cassel is not a long term answer, and Tyrod Taylor is a question mark. If you are going to invest some money on your football team, it might be smart to keep all three of them going into the season and let Jeff Tuel go.  We all know what Tuel is capable of, and let’s be honest, it was way worse than Manuel.