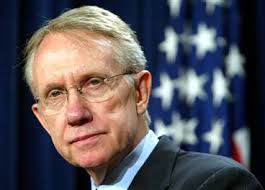 Some people will never be satisfied, and Harry Reid the Senator of Nevada is one that was not happy with the outcome of the NFL’s punishment for Tom Brady.  He honestly could care less. He would have rather see them remove the racist Redskins name from the team in Washington D.C.

Senator Harry Reid on Twitter: “I find it stunning that the NFL cares more about how much air is in a football than it cares about a racist franchise name.”

Well thankfully his opinion doesn’t really matter too much….