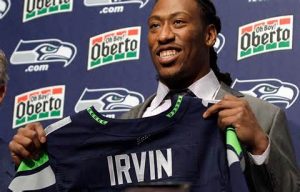 Bruce Irvin is pissed the Seahawks declined his option but will he return next year?

Robert Littal of Black Sports Online is a very solid reporter and has been doing it for years, but according to Pete Carroll his story was wrong. Littal had a story last week about Bruce Irvin saying he would not be back with the team, but rather in Atlanta next year. BSO reports, Irvin said he would be with the Falcons next year. Carroll talked about it yesterday.

“I’m really glad you asked me that, because he didn’t say that,” Carroll said in response to the quote from Blacksportsonline.com. “We’ve been talking all along, he’s been working out in Atlanta for three weeks, and he said in response to the question ‘Do you want to come back home?’ He said: ‘Everybody likes to come back home, it’s a dream to come back home.’ It wasn’t in reference to leaving us and coming back, so he was really adamant about it, and I asked him so let’s leave it and not go at it anymore. I’m glad you brought it up. We’ve seen at the Seahawks just in this last year a number of things being written or stated about players,” he said. “What they’re doing, what they’re thinking, and they’re being misrepresented in those situations. It was wonderful to see our guys respond, because they respond vehemently. They don’t want to be positioned like that, they don’t want to look like that… it doesn’t have to be a reporter at a network, anybody can put those messages out, and they have a life to them. Our guys are getting better at understanding that, and Bruce has learned again from this lesson.”